Over the years major works had been undertaken at St Patrick’s Church to restore the building. Works in the late 1980s caused significant damage to an Italian mosaic floor that lay covered in carpet for over 30 years. Once uncovered a survey found the floor so damaged it was totally beyond repair and Armatile was contacted for a solution.

St Patrick’s Church is a landmark building overlooking Newtownards in North County Down. It was constructed in 1877 on grounds donated by Marchioness Londonderry who also fully funded the building work and employed the services of prolific English Architect Joseph Aloysius Hansom to design and manage the project.

Hanson, who worked mainly in Gothic Revival Style designed over 200 buildings including Birmingham City Hall. He is also famed for designing the horse drawn Hansom Carriage. He became the dedicated architect of the period with many churches throughout England bearing his stamp while St Patrick’s Church in Newtownards is his only project in Ireland.

Over the years major works had been undertaken at St Patrick’s Church to replace the roof and update the building with heating. The latter works in the late 1980s caused significant damage to an Italian mosaic floor that lay covered in carpet for over 30 years. Once uncovered a survey found the floor so damaged it was totally beyond repair and Armatile was contacted for a solution.

After several years of planning and fundraising the client wanted to restore the original integrity of the church, creating a floor with bespoke hand made tile features that paid homage to the building’s history while taking visitors on a spiritual journey to live lives built on the teachings of the gospel.

Due to its reputation for understanding the etiquettes of ecclesiastical restoration projects Armatile was appointed. Its brief was to work with the architect and client to design, refine and source the tiling package that would bring the client’s visions to reality and restore the building’s relationship with its beautiful architectural features for future generations to enjoy. 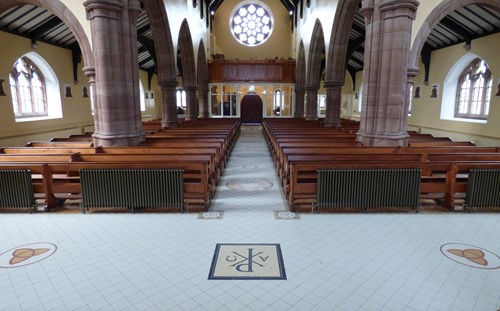 Great care was taken to ensure every element of the new floor is designed to link with the original architectural features of the church and create a seamless transition between the brand new and older surfaces. The circular Celtic crosses and quatrefoil feature panels inlaid throughout the Nave floor were specifically designed to replicate the detail of the window arches and create a visual connection with the prominent architectural aspects of this Victorian period building.

The highly detailed hand-crafted mosaic panels along the centre aisle were hand-made by Armatile’s Artisan Team to depict the four evangelists of Matthew, Mark, Luke and John, the authors of the New Testament, and are specifically positioned in that order to bring visitors along the bible story to the base of the church altar. The use of polished and matt surfaces creates shimmering elements that draws the eye along the centre aisle.

The large cross in the entrance porch was intricately cut by Armatile’s Waterjet Team. It strikingly recreates the design, colours and wording of St Patrick’s breastplate. Its prominent position at the entrance welcome’s and reminds visitors of the origins of Christianity in Ireland and directly leads on to one of two significant, rescued mosaic panels.

During the restoration two remaining Italian mosaic features were expertly removed intact from the floor and stored for reuse. One was of St Patrick’s Bell and the other The Chi-Rho symbol representing Jesus.  These beautifully hand-crafted designs were preserved before being fully restored in the floor with St Patrick’s Bell situated at the start of the centre aisle and The Chi-Rho right at the top of the centre aisle in front of the altar. 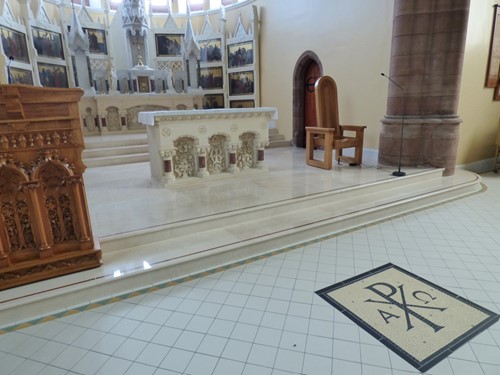 The colours used in the new floor were explicitly selected from pieces used in the salvaged St Patrick’s Bell and Chi-Rho mosaic designs to directly reconnect with the originality and history of the church.

Lastly the Spanish polished cream marble installed on the sanctuary was chosen to highlight the materials in the church’s original altar which is still in use. The contrasting red marble strips, inlaid in the steps to assist people with visual impairments, tone with the sandstone used to build the church and further enhances the overall aesthetic. 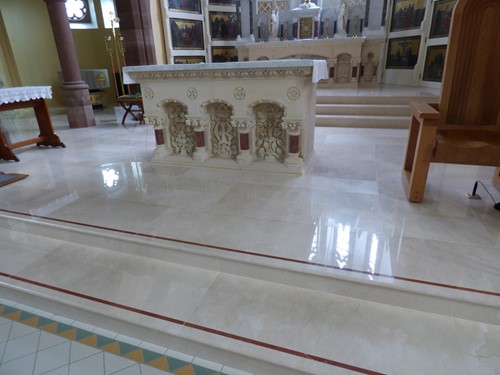 Utilising all its experience Armatile sourced a combination of tiles in specific colours that matched perfectly to the original stone, mosaic and features in the Church while being fully compliant with modern building standards.

Working to the client’s ideas Armatile’s in-house Design Team drew up detailed fabrication drawings for approval and itemised each individual piece required for the restoration project.

Armatile Manufacturing Team employed all its skills to design, programme, cut and hand make every decorative feature. They used a combination of modern waterjet cutting and traditional artisan tile cutting methods to bring the clients creative designs to fruition ensuring extraordinary attention to detail to link with and preserve the integrity of this beautiful old building. The four mosaic features depicting the evangelists were truly a labour of love. 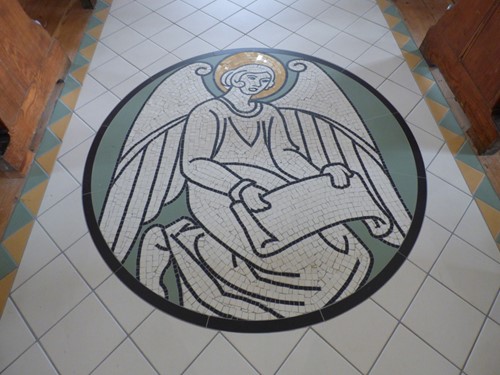 Every single design element including the mosaic features, borders, Celtic cross and quatrefoil panels was pre-mounted on mesh in Armatile factory before being despatched to site for installation.

This service dramatically eased installation on site, significantly reducing fitting time and labour costs, and ensured the installation of the visually striking new floor could be completed with minimal disruption to all other trades on site.

Installation of the New Floor

The entire church and sanctuary floors were expertly tiled by Armatile Contract’s Team. As the extremely intricate and decorative designs were all manufactured by Armatile in its factory in Armagh it was the perfect solution for them to install them too. The same attention to detail is prevalent throughout the completed project ensuring the restored church can be lovingly used by visitors for many future generations.

Conclusion - Working in partnership to preserve the integrity of old buildings

Armatile has a reputation for working on heritage projects. With a sympathetic approach to restoration its team expertly interprets design needs and translates each client’s creative vision into reality. The brief of this Heritage Restoration Project was to restore the integrity a beautiful, historic building. This project at St Patrick’s is a great example of how Armatile works in partnership with all project stakeholders, including the client, architect, builder and users to deliver a tailored surface solution that not only meets but exceeds the client’s expectations.

Key highlights of the project, including waterjet cut features, and hand cut and assembled mosaic motifs. 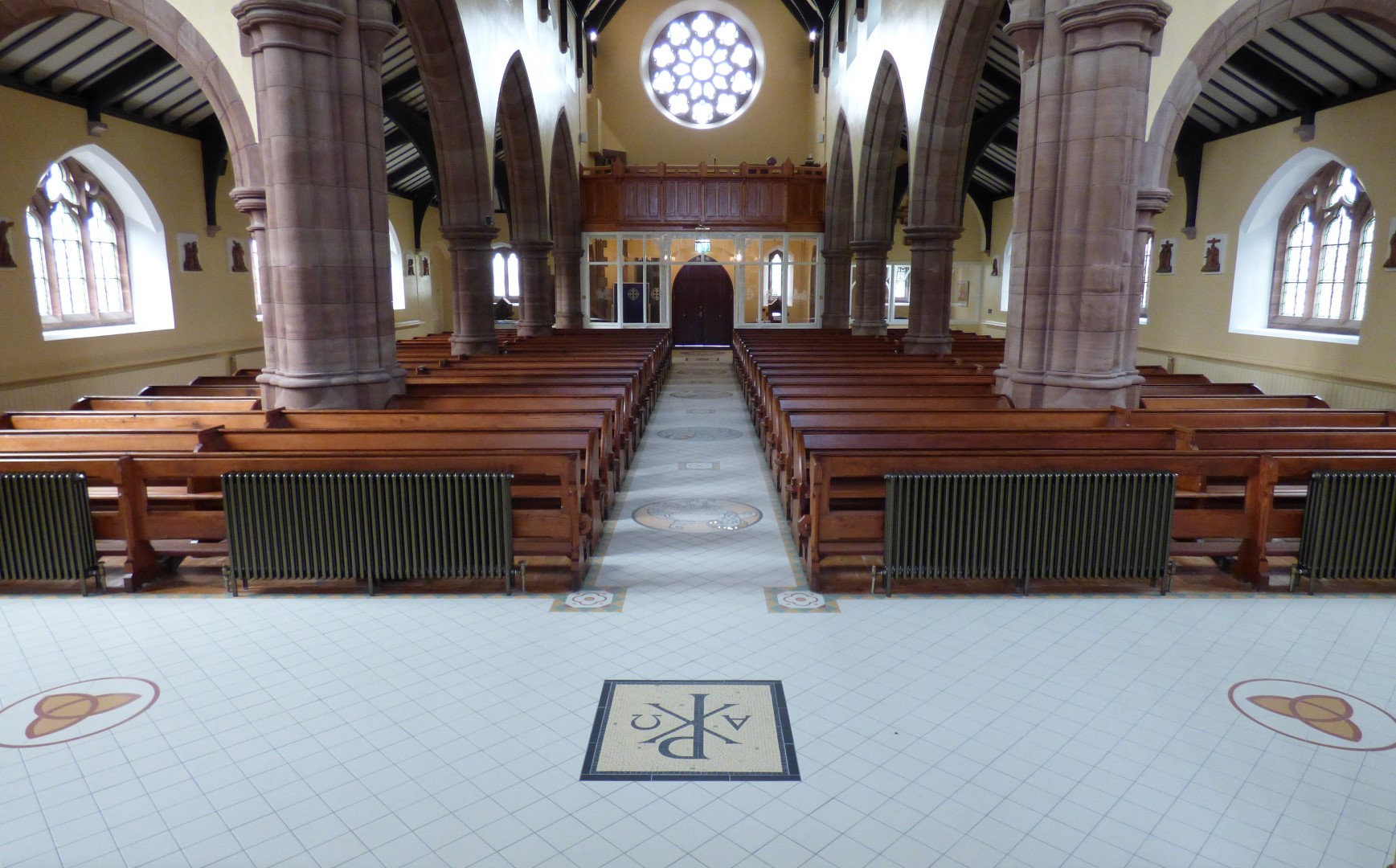 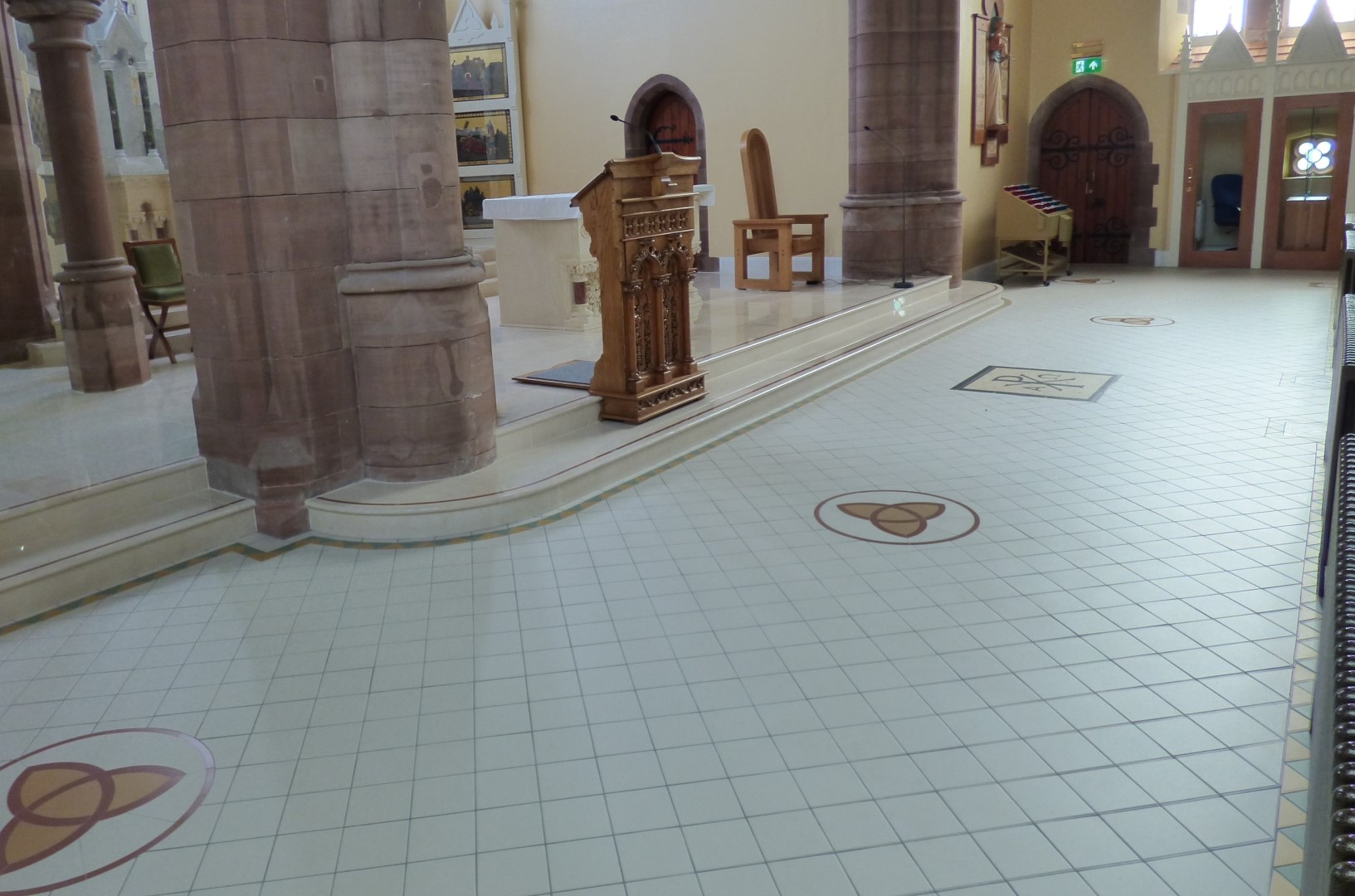 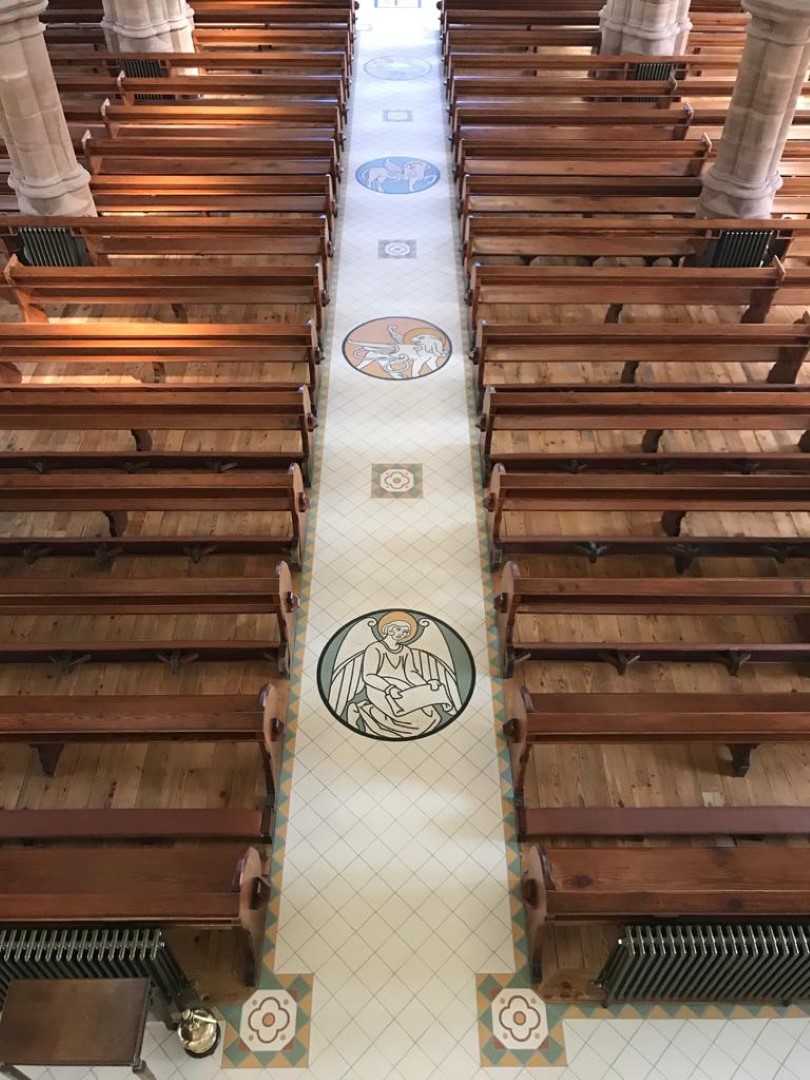 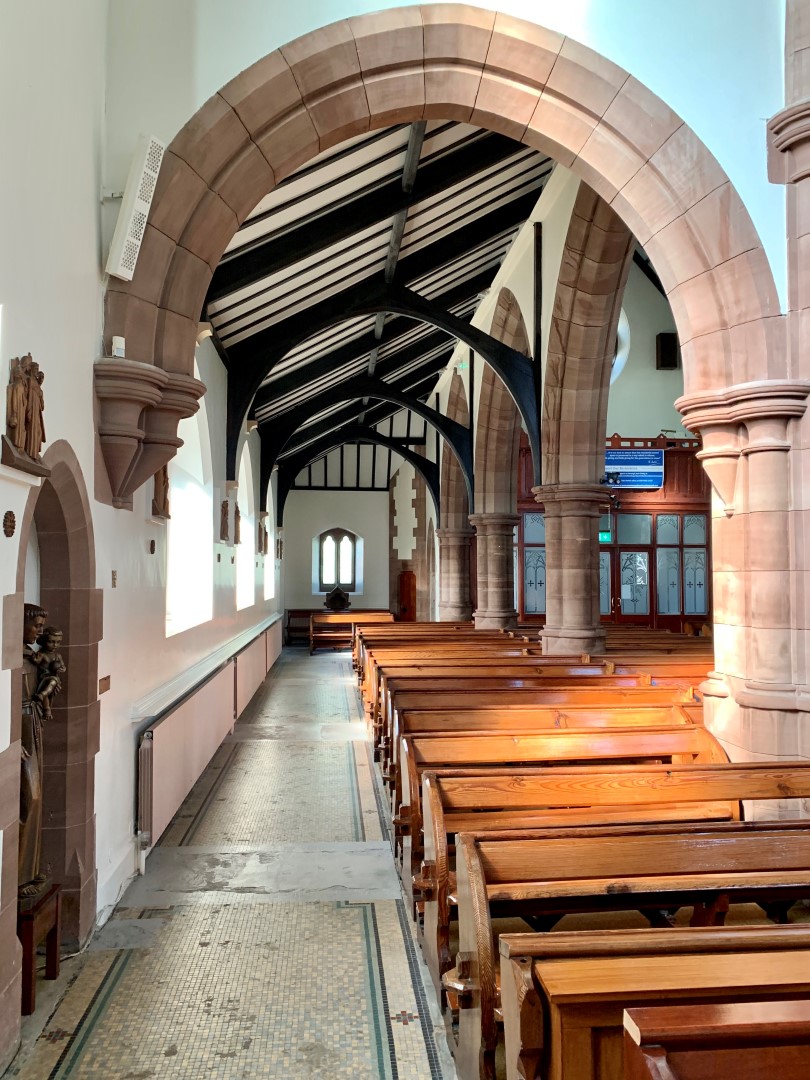 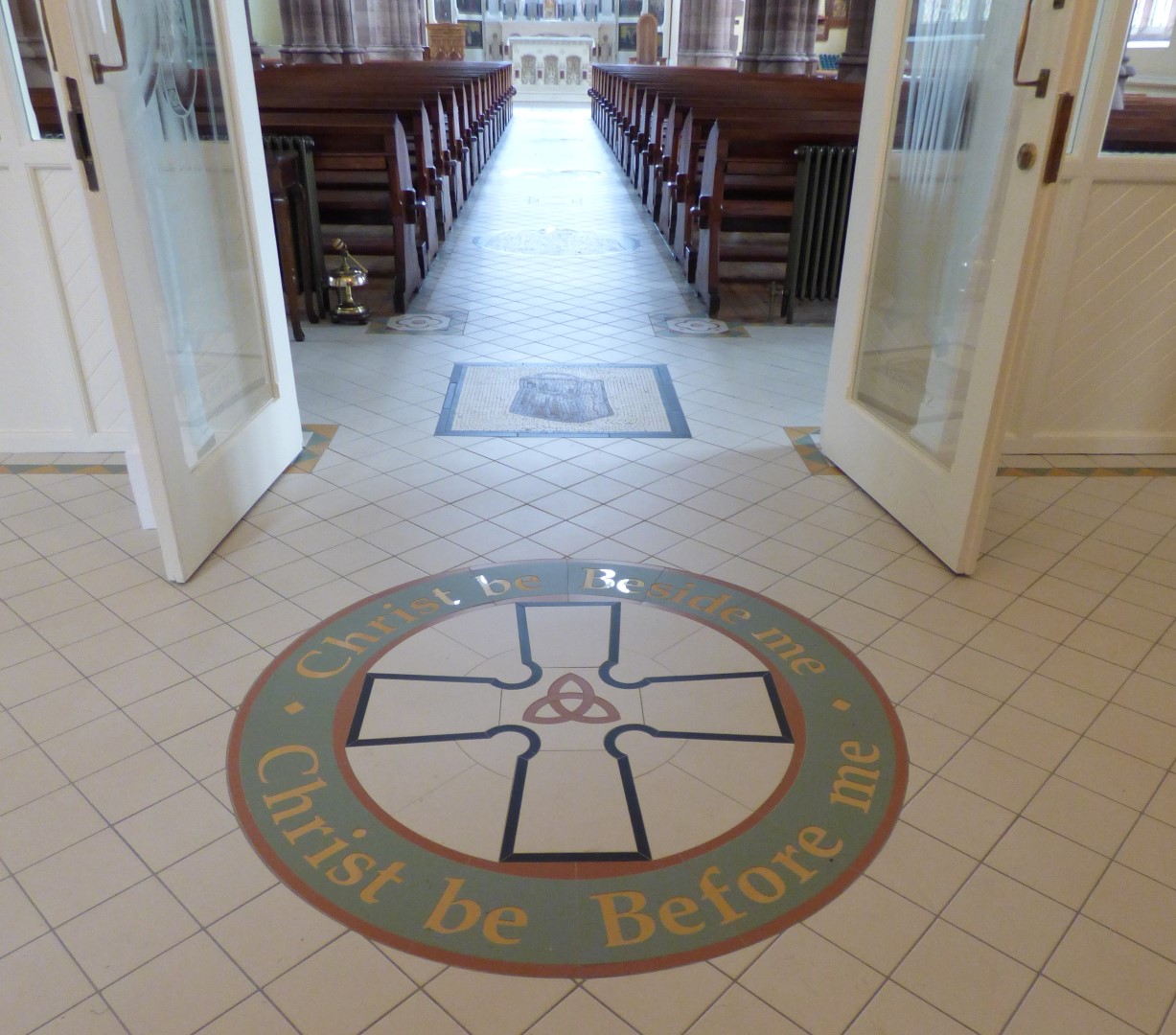 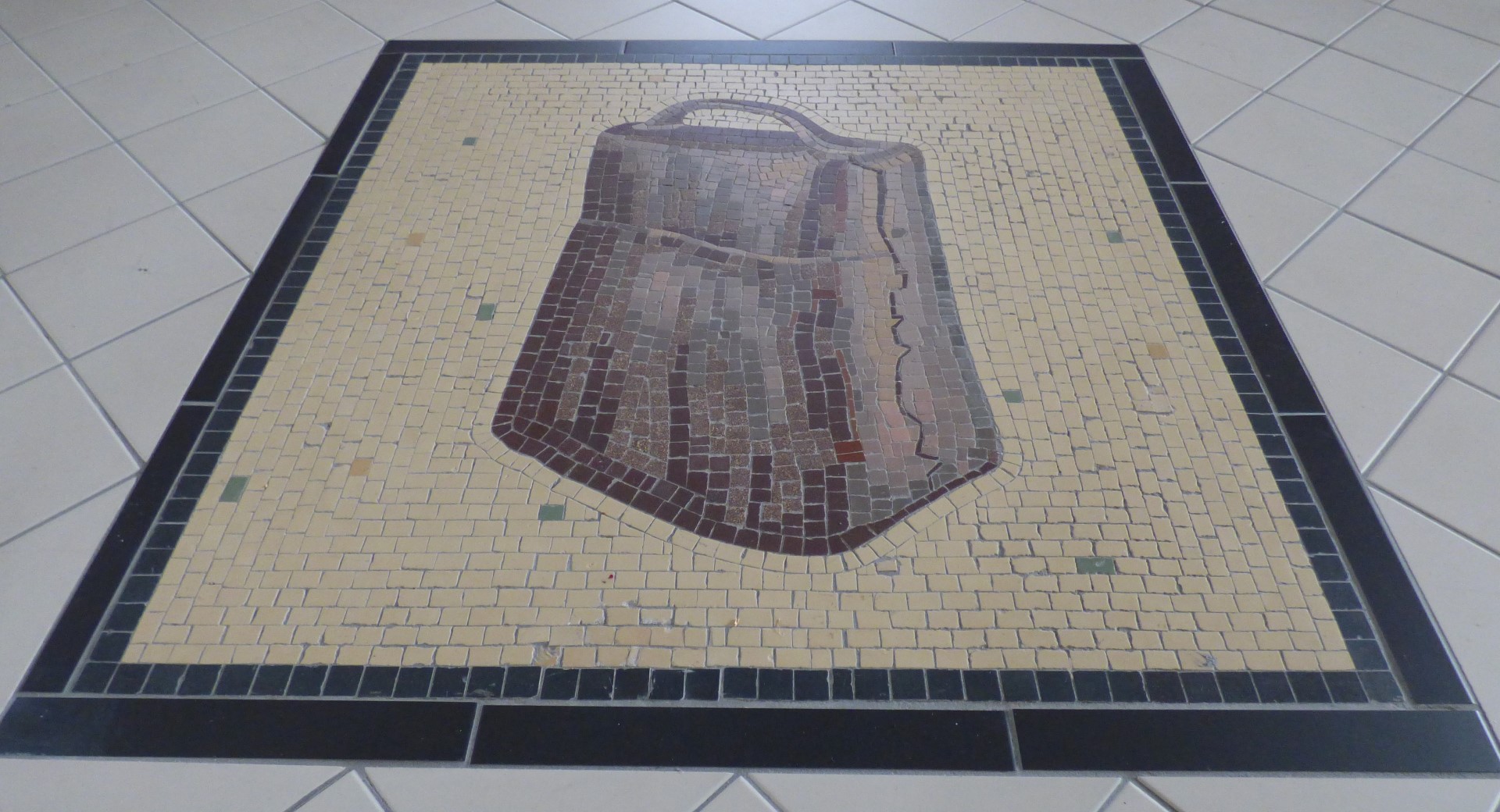 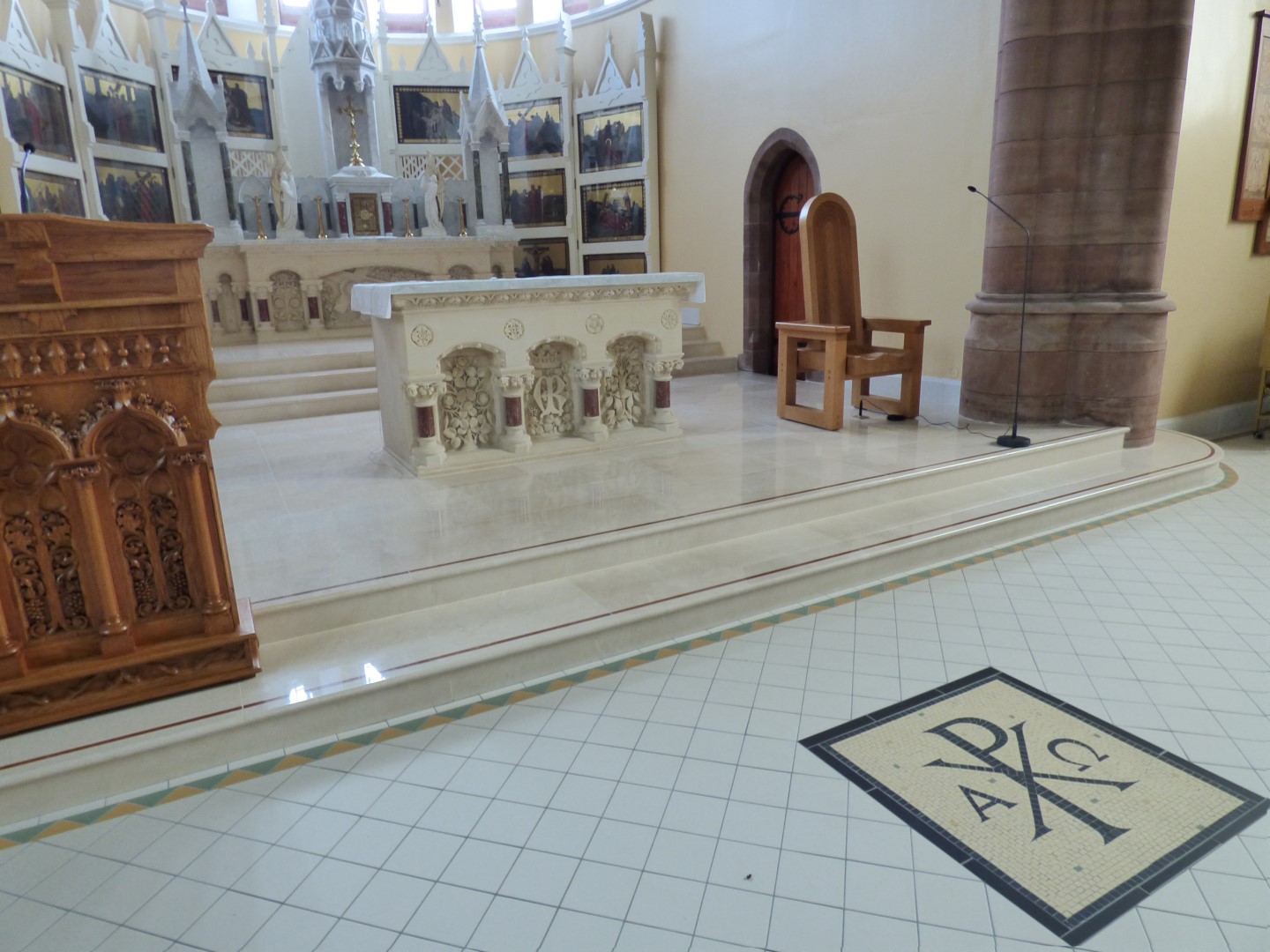 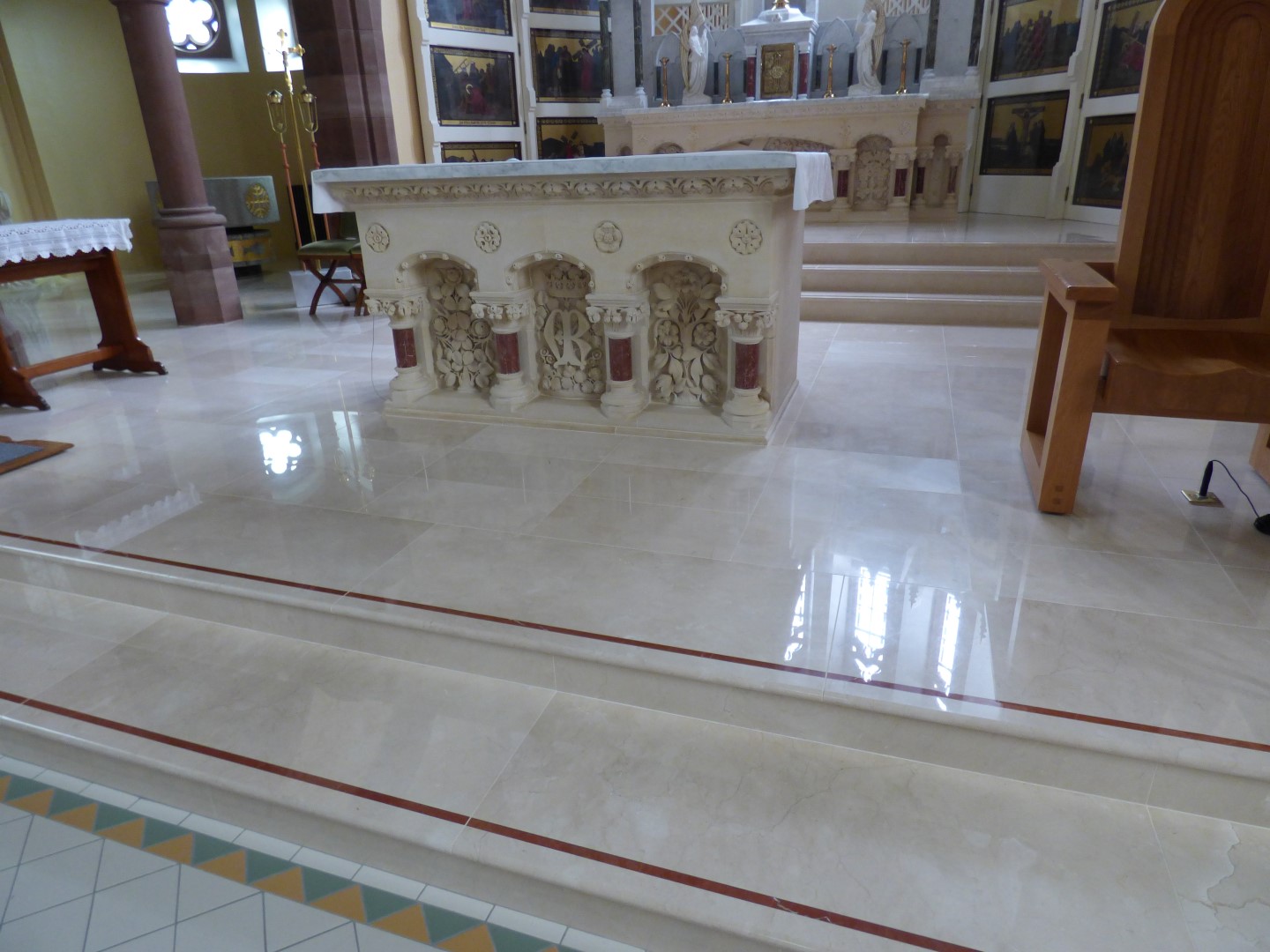 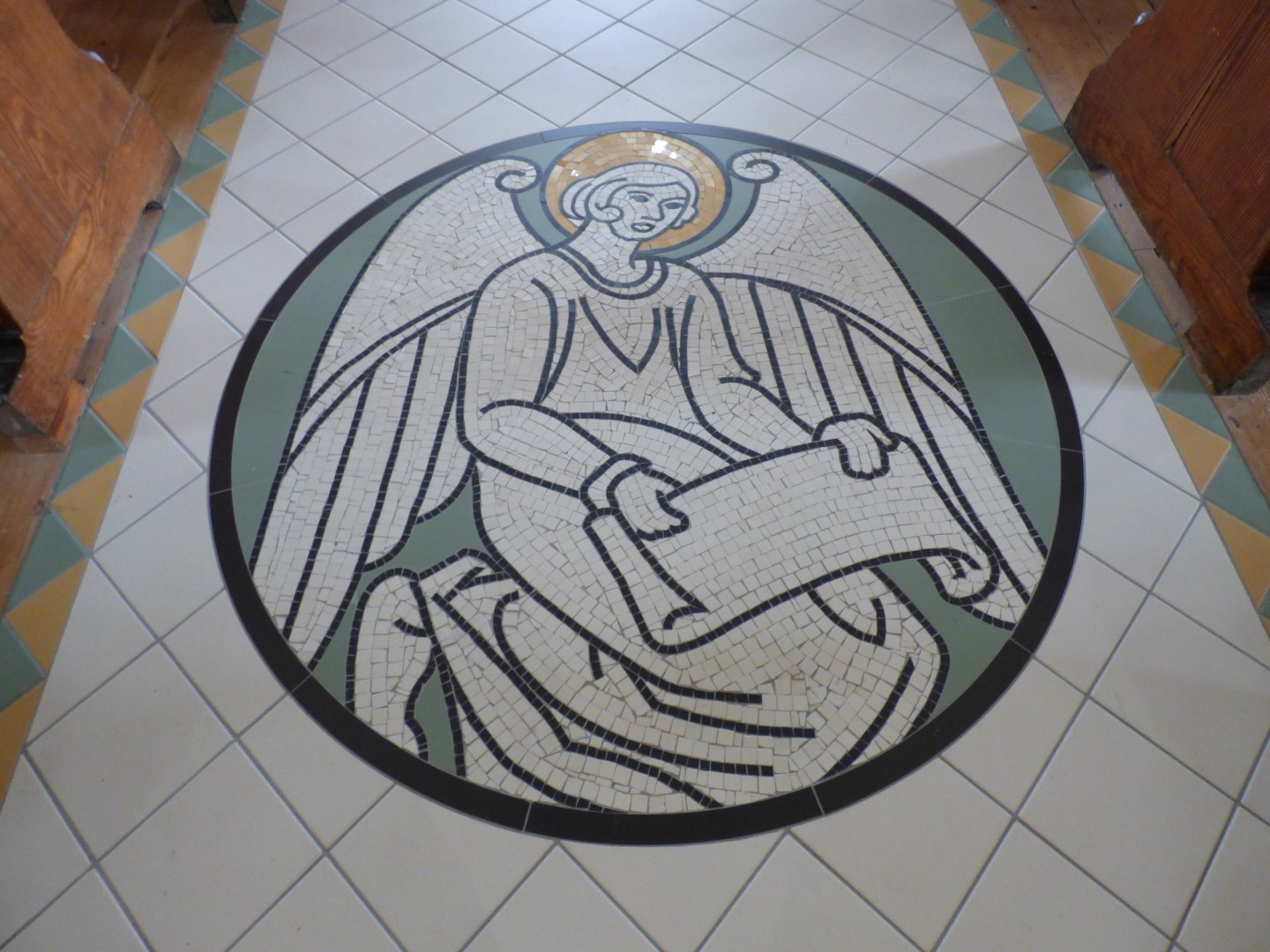 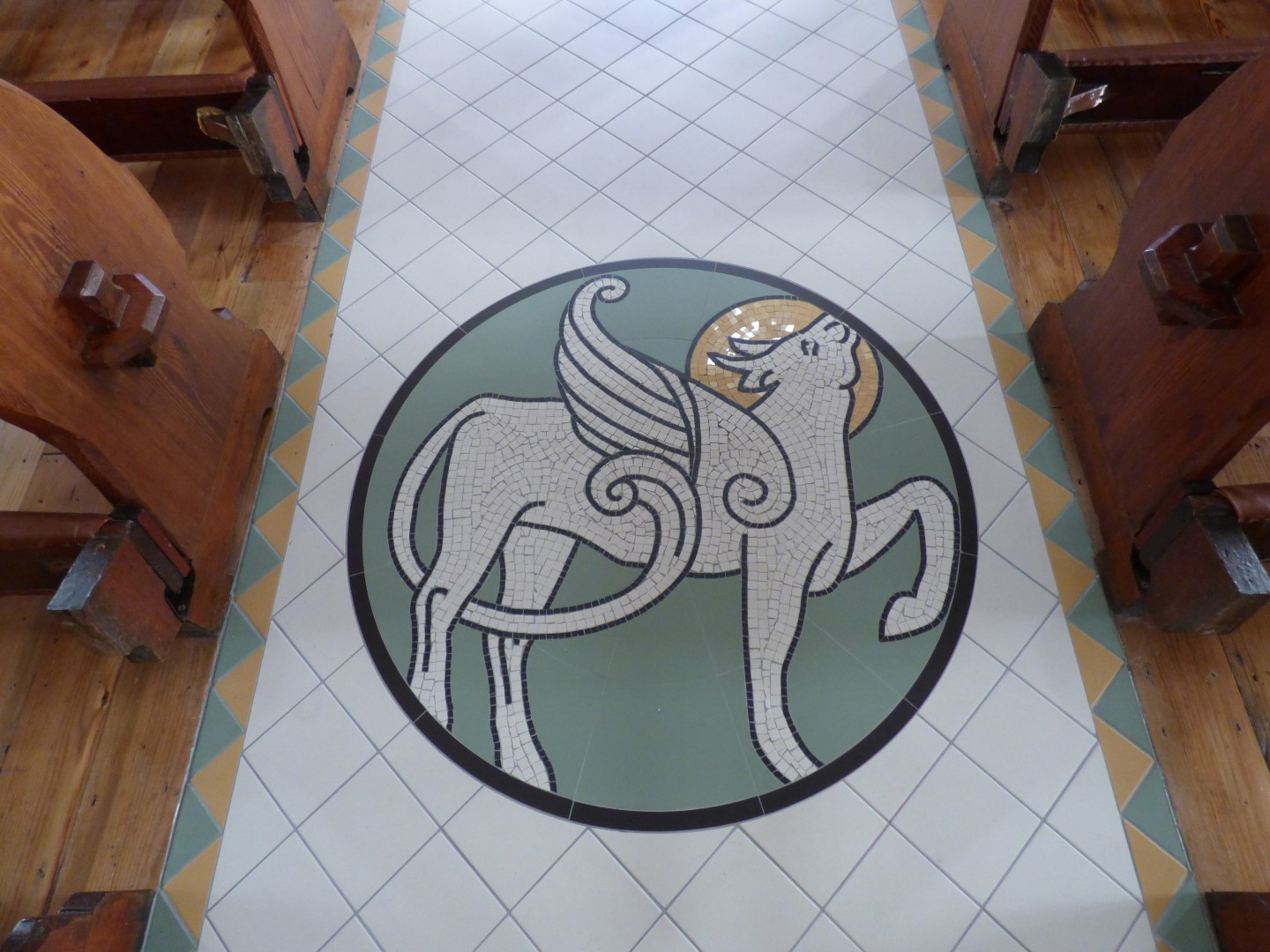